Failure. We fear it. We do everything to avoid it, pushing ourselves to succeed. We suffer sleepless nights, struggle and strive and sometimes end up failing anyhow. We feel stupid, worthless, frustrated, and doubt our ability to make decisions. But what if failure wasn’t something to be feared? What if it could be honoured, or even celebrated?

A year ago, I wouldn’t have asked that question. I would have seen failure as failure. But now, I’m embracing the idea of failure as a gift.

This semester has been a wonderful way for me to explore this concept. I’m not saying this because I am failing in any of my classes, but simply because some of the things I have been trying haven’t always been “successful” in the ways I thought they would be.

The first example arises from an interdisciplinary course I am enrolled in. We’re a group of 40 students from 14 disciplines, all coming together to work on one project: a mobile learning lab for a community organization: the Yorklands Green Hub.  It’s fun but also challenging. We have weekly assignments, as well as an end goal. Our first assignment was to create a visual image of our disciplines. As a writer, I know how to manipulate words. But images? That’s another matter! 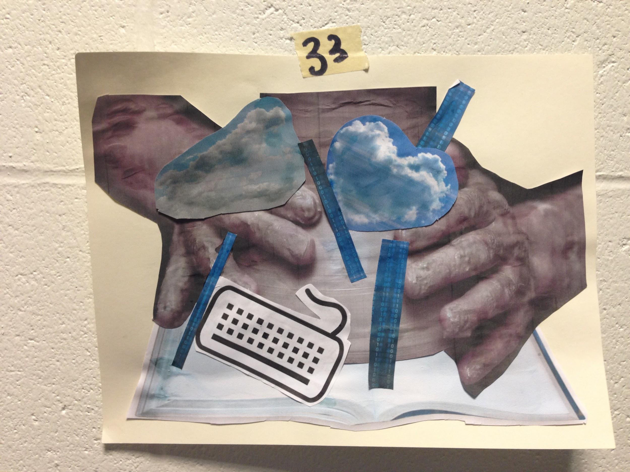 Looking at the image above, would you have thought I studied literature? Probably not! I had unnecessarily complicated my image rather than using an image of a book with images of well-known authors. But by failing that assignment, I learned that simple is often better.

During reading week, I experienced another “failure.” I dreamed of winning the University of Guelph’s  Green Gryphon Initiative award for my proposal to use in-line hydrokinetic generators within campus water lines in order to harness the dynamic energy of water. I had spent months researching types of hydrokinetic generators, so I thought myself well-prepared when I approached the University’s physical resources manager to discuss feasibility. His answer was succinct: “No, not now.” I marked down another failure, but one that will not last forever. Someday, the equipment or conditions will change, and my vision may prove feasible after all. When? I don’t know, but I’ll keep looking for that opportunity.

At the same time, I experienced another roadblock. From the beginning of the course, I had been conducting research, sharing my discoveries and asking for feedback from my working group. I waited a week, a month, almost two months. No one responded. I was afraid that our project would fail, and so would I.

Upset, anxious, and frustrated, I turned to my advisor and explained my situation. I was expecting him to tell me to suck it up and keep going. Instead, he said “Alright. You tried. It’s not working. Let it go. Let’s get you working on something else.”

In academia, and in many institutions, failure is often hidden. In these spaces,  “success” is framed as a straight road, and when failures occur, the blame is put on the individual. But the road to success is filled with failures. There are always mistakes, wrong assumptions, and false leads. Those mistakes are as much a part of the educational process as the success. In fact, they are what makes the success sweeter.

Yet people don’t talk about their failures. They hide them, and their feelings that go along with those experiences (shame, fear, anger, frustration, etc.). They’re afraid that in seeing their mistakes, others will think less of them and their success.

What if that changed, though? What if, instead of hiding those mistakes, those wrong turns, those false leads, higher education embraced them? I don’t mean to say that the institutions should point out someone’s mistakes and put them down, but that institutions could, instead, acknowledge that, in the quest to learn, we take risks, and sometimes fail.

What if professors showed their research mistakes and what they learned from them?  What if students were allowed and encouraged to take risks academically, and to try something out of their comfort zone, to change how they feel about failure?

I’d love to see more vulnerability in academia, more exposure of what actually happens on the road to success. Little is gained from sitting in the safe zone. Sometimes you have to be willing to fail in the short game in order to succeed in the long game.

The ICON classroom resides in the ancestral and treaty lands of the Attawandaron people and the Mississaugas of the Credit, and we recognize and honour our Anishinaabe, Haudenosaunee, and Métis neighbours.